They open at 10 a.m. and close at 3 a.m. For 17 hours straight, the sounds of country music flow out of the pulsing honky-tonks that line the four blocks of Lower Broadway and its arteries, earning Nashville the moniker “Music City.”

Although country music and its stars come to mind when you think of Nashville, the metropolis has made a surprising pandemic comeback in drawing not only huge crowds eager for music and fun, but new residents as well. Nashville has surpassed Memphis to become Tennessee’s most populous city, and judging from the giant construction cranes looming over the downtown area, progress is in full swing.

Many of the restored buildings that crowd the riverfront house honky-tonk bars that have a history of their own. Luke’s 32 Bridge (country star Luke Bryan’s place) occupies a former bank building dating back to 1928, and the Ernest Tubb Record Shop is housed in an 1850s edifice that once was a hotel. They’re set against a backdrop of sleek skyscrapers; most noteworthy is the AT&T Building, nicknamed the Batman Building for its architecture resembling the DC Comics superhero.

It doesn’t matter what time of day you visit Lower Broadway, it’s always bustling. There are no cover charges, so you can pop in, check out who’s playing, order a beer and stay, or saunter over to the next bar. You might find lines at the more popular places such as the iconic Tootsies Orchid Lounge, a hot spot since the 1960s. Its back door shares an alley with the historic Ryman Auditorium where Grand Ole Opry performers were known to skip out between sets for a drink at Tootsies. Willie Nelson and Keith Urban each credit the honky-tonk for boosting their careers. 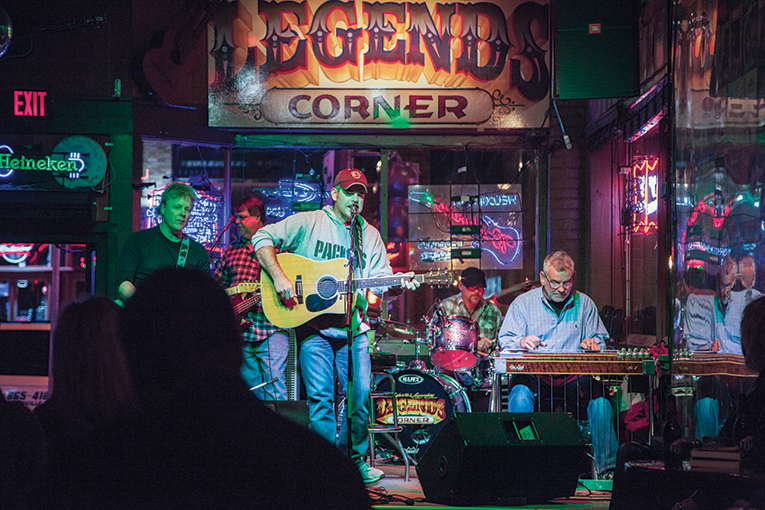 Traditional country music lovers congregate at Robert’s Western World, where performers pay tribute to such legends as Patsy Cline, Johnny Cash and Merle Haggard. In the window of Alan Jackson’s AJ’s Good Time Bar, a band takes requests while the crowd sings a rousing version of Garth Brooks’ “Friends in Low Places.” Blake Shelton’s Ole Red provides a bigger stage where Payton Smith, a skinny 21-year-old kid from Louisiana, is picking his guitar and singing his heart out as if he were performing for a jam-packed arena of fans. Newest is Miranda Lambert’s four-level, pink-hued Tex-Mex restaurant and entertainment venue, Casa Rosa, which opened earlier this year.

Nestled between the bars are such shops as Betty Boots and Trail West—both rich with the fragrance of leather and stocked floor-to-ceiling with cowboy boots and hats. Across from Bridgestone Arena, Fifth + Broadway, a new shopping-dining-entertainment complex, adds a touch of sophistication. Stores such as Ariat, selling authentic western wear, and Free People, with racks of boho clothing, share space with the new National Museum of African American Music. In the upper-level Assembly Food Hall, Nashville’s famous hot chicken (Southern fried chicken with a cayenne kick) is a local flavor worth tasting. The cocktail crowd will find a whiskey-and-bourbon bar, a tequila bar, and a rooftop bar and music scene.

An easy way to get the lay of the land in Nashville is to hop on an Old Town Trolley. The sightseeing tour, known for its entertaining guides who mix facts with legends and laughs, makes 14 stops. A must-visit is the three-story Country Music Hall of Fame and Museum, where Dolly Parton and Johnny Cash, along with 137 other inductees, have earned a plaque in the Hall of Fame Rotunda. In the adjacent museum, you can trace the history of the genre through exhibitions such as Outlaws & Armadillos: Country’s Roaring ’70s, which explores how Willie Nelson and Waylon Jennings created their brand of outlaw country.

As the trolley travels beyond Lower Broadway, you’ll see the Tennessee State Capitol, a Greek-Revival structure perched prominently on a hill. It’s one of the few state capitols that does not have a dome. Centennial Park surprises with its Parthenon, a replica of the original temple in Athens, Greece. It was built of plaster in 1897 for Tennessee’s 100th birthday and made into a permanent, concrete structure in 1920. You’ll pass Vanderbilt University, a beacon of higher education in the South, which was founded in 1873 by shipping and railroad tycoon Cornelius Vanderbilt. Although he donated $1 million to the school, “the Commodore,” as he was known, never set foot on the campus. 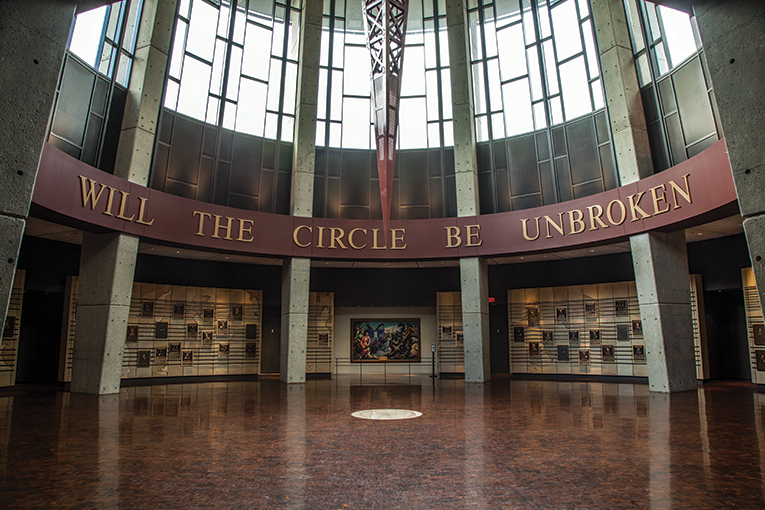 The trolley also weaves through Music Row, the heart of the music industry. Several city blocks (Music Square East and West) are home to small houses converted into video production facilities, record label and law offices, and numerous recording studios—some with banners announcing which country stars have recorded there.

If you really want to delve into Nashville’s secrets, book a Famous Footsteps Walking Tour with Kaysie Young of Experience Nashville Tours. The vivacious guide spills all, including a tidbit about a mural painted on the exterior wall of Legends Corner bar. The 2016 artwork originally featured Dolly Parton, Reba McEntire and Taylor Swift, but in 2020, Brad Paisley replaced Swift after she famously dumped country for pop music. It caused a brouhaha with Swift’s fans, but on closer examination of the mural you can still see a lock of her golden hair peeking out from behind the brim of Paisley’s hat. i"> 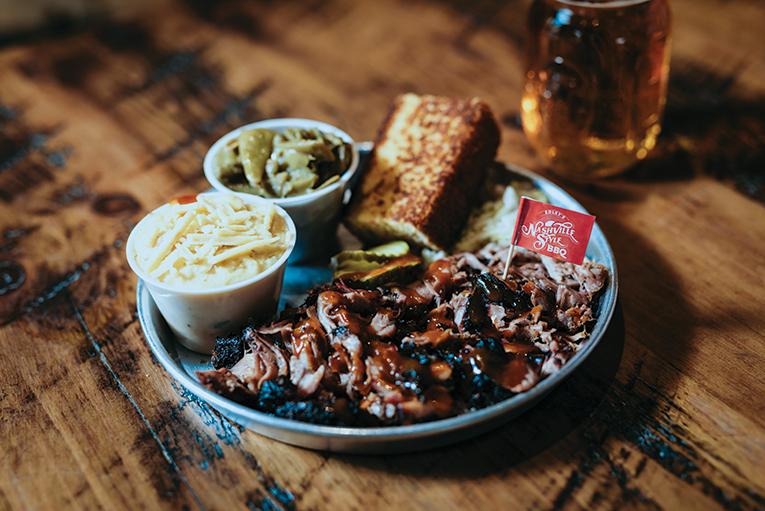 Escape To Nashville, Tennessee For BBQ, Music, and The Neon Glow

Read Escape To Nashville, Tennessee For BBQ, Music, and The Neon Glow by Orlando

Brandi Carlile Is Right on Time

Read Brandi Carlile Is Right on Time by Spin

Read Things to do by Chicago Tribune